Through Greener Miles drivers can calculate the amount of CO2 emissions they generate in one year of driving by visiting www.terrapass.com/ford. Customers then have the opportunity to purchase an offset that supports the production of renewable clean energy from wind or dairy farm methane.

Fact is the average fuel economy of Ford's fleet is 18.8 mpg, dead last among the top six automakers in 2005--for the fifth straight year, according to the EPA.

The blatant disregard and contempt Ford's engineers pay to fuel economy and efficiency means that Ford's vehicles release more CO2 into the atmosphere than all of Mexico--yes, the entire country of Mexico!

To make matters worse the EPA is known to OVERestimate fleet MPG [link]. Since industry games the US government, its known

EPA ratings are the result of 1970s-era test assumptions that don't account for how people drive today. Ford, like most automakers, is also known to test prototype vehicles that can yield better mileage than a consumer can get.

According to US Consumer Reports to get a good (honest) idea of your mpg you need to, "discount the EPA sticker numbers for city travel as follows: conventional cars and trucks, 30 percent; larger hybrids, 35 percent; diesels, 36 percent; smaller hybrids, 42 percent."

Ford is playing games and peddling gimmicks in its new partnership with TerraPass.

If Ford wants to reduce CO2 and get serious about climate change it will increase its fleet overall MPG and not peddle spurious offsets based on cooked mpg numbers.
by: ProfMKD @ 11:42 am | 0 comments 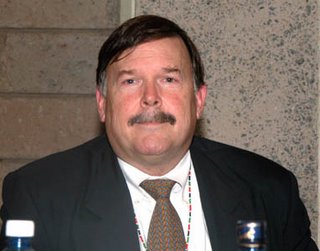 We see that PSD Blog is bringing in the experts ( J. Warren Evans (right), Director of the Environment Department at the World Bank and PSD's own Rachel Kyte) to present their views on the future of the carbon market, adaptation and mitigation measures, and the roles of the private and public sector in meeting the requirements of Kyoto and beyond.) [permalink]

We'll watch and see if they answer honest, but tough questions, from their comments section.