"The original purpose of the CDM has not been realized," lamented the delegate representing Costa Rica.

This dialogue took place during the second day of this two-week conference. Agenda item 6 on the development and transfer of technologies provoked discussion on the CDM's track record to date. Many parties (national governments) to the convention expressed dismay with a variety
of issues related to methodologies, transparency, and most significantly, development impacts.

The CDM emerged from the desire to stop fuelling economic development with conventional fossil fuels, noted the Costa Rica delegate. The CDM was a way to "alter development pathways," he said.

Instead, it is focused upon projects that are hardly make a development impact. The CDM is dominated by projects like capturing methane from landfills, and transforming hydrofluorocarbon (HFC) plants into hydrochlorofluorocarbon (HCFC) factories. (HFCs have a greater global warming radiative effect, but less of a ozone depletion effect, than HCFCs. CDM projects of this nature may help curtail greenhouse gas emissions, while simultaneously reversing gains made through the Montreal Protocol on the ozone layer).

"The number of HFC and methane projects is limited worldwide," said the Costa Rica delegate, who predicted, "The CDM will practically end without leading to energy-related actions like renewables. The international climate change regime, the Kyoto Protocol, relies on the CDM to steer investment in energy flows to facilitate energy efficiency and renewables.

Argentina and Senegal's representatives agreed with Costa Rica's analysis, with Argentina saying "the lack of energy-related projects is a concern to our delegation as well. HFC/HCFC projects were not the idea behind the creation of the CDM."

Richard Worthington, representing the Climate Action Network, echoed these concerns. Projects like monoculture plantations, HFC/HCFC tranformations, and chemical process modifications, should not be considered under the CDM. He urged the CDM board "to avoid fuel switching projects being pushed by the World Bank and corporate interests." These kinds of projects "introduce a form of carbon blackmail, in which, for example, a company would be paid
not to switch to coal."

Also in today's plenary, the United States continued to take a pounding, finding little support for its initiatives. At one point, the U.S. delegation complained that "NGOs (non-governmental organizations) will have greater rights than sovereign states" that are not a party to the Kyoto Protocol. The Bush/Cheney administration is a staunch opponent of Kyoto, although it is a party to the Climate Convention that spawned the protocol.

The U.S. also protested an agenda item on cooperation between the Climate Convention and upcoming UN-affiliated meetings on small island states, global disasters, and follow-up to the Johannesburg sustainable development summit.

Delegates from Samoa, Tuvalu, Barbados, Cuba, St. Lucia and Panama took particular exception to this latest U.S. insult. The delegate from St. Lucia noted a local saying. "'Who feels it, knows it.' Climate change is undermining our way of life," he said.

Steve Sawyer, representing the Climate Action Network, said he was "puzzled why some developed countries fail to recognize their overwhelming moral obligation" to help small island states that are already impacted by climate change. "CAN urges all parties to accept their responsibilities, and to not be held hostage by one or two powerful parties."

Sawyer predicted that some time in future, the US will be forced to abide by Kyoto. "We are convinced that the US will rejoin the Kyoto Protocol eventually." Paraphrasing Winston Churchill, Sawyer said, "At the end of the day, the U.S. will do the right thing, once it has exhausted all other possibilities." Saudi Arabia earned a Fossil Fool Award Wednesday in Bueños Aires for "unprovoked attack on UNFCCC Executive Secretary Joke Waller Hunter during the morning's COP plenary, under the discussion on the agenda item having to do with relationships with other international processes."

India was given an award for "showing short-sighted greed for financing business-as-usual projects."
by: ProfMKD @ 12:00 pm | 0 comments 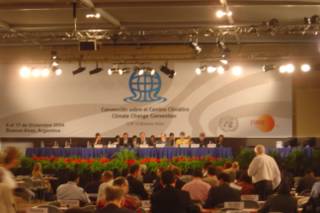 Plenary session during the COP10 meeting of the Climate Convention.
Nadia Martinez
by: ProfMKD @ 9:57 am | 0 comments

WASHINGTON, December 7, 2004 ­ Late last year, officials at the World Bank decided it was time to practice what they had been preaching about reducing carbon emissions.

Some environmentally-friendly types at the international finance agency calculated the bank spewed 147 tons of carbon into the atmosphere when it flew in attendees for a conference in Washington in October 2003.

Looking to set a cheap and practical example on the worldwide issue of carbon emissions, the Washington, D.C.-based organization went halfway around the world to a tiny village located in the remote jungles of southern India.

In the ironically named village of Powerguda, the villagers had recently begun to collect and sell to a local mill the seeds of a native tree called the Pongamia pinnata. The seeds produce a natural oil that can be used as an alternative to diesel fuel. And unlike diesel and other fossil fuels, pongamia oil produces little carbon emissions when burned.

By providing the raw material for an alternative to relatively dirty diesel, Powerguda was effectively reducing the overall carbon load in the atmosphere­at least in the eyes of the World Bank. And it was this theoretical tiny reduction in worldwide carbon emissions that the Bank decided to buy to offset the carbon emissions resulting from its conference.

The price tag to the World Bank: $645. For that the bank got the village's entire potential carbon emission savings for the next 10 years...