Professor Michael Dorsey of Dartmouth College in the US, explains here what the negative impacts are of the oil industry lobby inside the official climate talks in Montreal. He exposes that the Head of the US delegation was hand-picked by Exxon-Mobil and warns that not addressing the pressing question of oil dependency is undermining real action on climate change.

| COP VoxPops: Video of Oilwatch Costa Rica delegate talk about the impact of the oil moratorium inside the talks |

Oilwatch Costa Rican and official government delegate Fabian Pacheco talks here about why a global oil moratorium is vital for action on climate change. He also reflects on what is happening inside the UN climate talks and expresses his frustrations on the lack of progress he is experiencing on promoting the oil moratorium to other delegates. 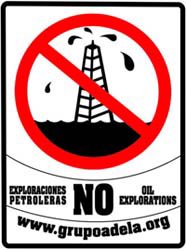 Eileen Clausen (4th from l) of the Pew Center on Global Climate Change, along with representatives from WWF, Shell Oil, the World Business Council on Sustainable Development, amongst others, report back on the findings of the Pocantico Report. Of its many recommendations the document suggests that future multilateral dialogues over climate change include only corporations and governments. The Pew Center was established with funds from the Sunoco Oil company.
by: ProfMKD @ 7:34 am | 0 comments