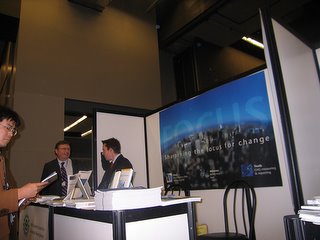 Today at the Climate Summit in Montreal, members of the Durban Group and the Environmental Justice Climate Change Initiative met with the Deputy of the US Delegation. (Harlan Watson, the Head of the Delegation sent his regrets and did not attend the :30 minute meeting).

When pressed on its commitment to meaningfully addressing climate change, the Deputy noted that the US Administration "did not want to participate in another Kyoto like process" that had "timetables and committments"

He further added that the "principal way" the US was addressing climate change was through "a number of voluntary programs." The Deputy stated that while in principle the US is committed to addressing climate justice issues, at present there is no one on the US Delegation that specifically has this task.

Meanwhile today the Montreal Gazette reports that one of the reason the US is reluctant to act seriously on climate change is that it is under control of the carbon lobby.

watch the video of the minister speech

In 1999, when the Costa Rican government signed an oil development contract with a US company and a ship arrived to the port of Limón to set off 20,000 seismic blasts onto the sea floor, during the height of the annual lobster migration, the local people were outraged.

The network ADELA (Actions Against Oil Development) was created as a broad coalition of community development organizations, tourism boards, small farmers, indigenous and afro-Caribbean and environmental groups who have come together to confront the administration’s decision to sell oil exploration rights in their area. ADELA has been fighting to defend this region, with the support of OILWATCH Costa Rica.

Harken Energy based in Houston, TX (previously owned by George W. Bush) and MKJ Xplorations from Louisiana were the joint contractual owners (since 1999) of the rights for exploration and extraction of oil and gas in 5,634 square kilometers, of both marine and land mass. This area includes the offshore Caribbean sea, extending south from Tortuguero National Park, totally surrounding Cahuita National Park and consuming a national wildlife refuge which borders with Panama as well as inland areas including indigenous Bribri and Cabecar territories. In 1999, Mallon Oil was also granted concessions to 10.500 square kilometers including the entire northern region of Costa Rica extending from the Caribbean coast to Lake Nicaragua, also covering various protected areas and Maleku indigenous territories

There have been successful Supreme Constitutional Court legal challenges protesting the violations of local citizen's rights to participate in decision-making processes and to protect their sensitive environment. As oil drilling directly threatens local livelihoods and valuable ecosystems, citizens also prevailed against Harken on environmental impact reviews before the Environmental Secretariate (SETENA), convincing local and national government officials to declare a Moratorium on Oil Drilling. The Costa Rican government also obliged Harken to withdraw an international arbitration claim in Washington for $57 billion dollars in damages. However, the Mallon concession is still under administrative appeal at SETENA and Harken is once again suing Costa Rica at the national level.

For six years, the local people have been tirelessly and successfully challenging the corrupt contract to assure that the Costa Rican Caribbean is not converted into a Harken Costa Rica oil enclave, and have prevented the formal signing of a contract with Mallon. It is clear that these agreements do not serve local national interests. However neither Harken nor Mallon will just walk away. They believe that with the free trade agreement, CAFTA, and a newly elected president in Costa Rica for 2006 the oil business will once again prevail in this region as they have in many other areas throughout the globe.