The World Bank's first CDCF project, a hydro plant in Honduras, was blocked today when 5 members of the CDM Executive Board requested a review of the project. Some of them picked up on the criticisms made by the International Rivers Network that the project was "non-additional" (i.e., was going to happen anyway).

Ben Pearson, an analysts at the Australian based CDM Watch said, "It's a big headache for the Bank and an embarrassment!"

According to Pearson, "The project is now delayed till the next Board meetings (Feb 23-25 2005), when the Board will decide whether to review it, which they probably will. So, it may go ahead at some stage in the future but for now is stopped as a CDM project."

Pearson will arrive on Wednesday 8 December in Bueños Aires to participate in the climate negotiations. 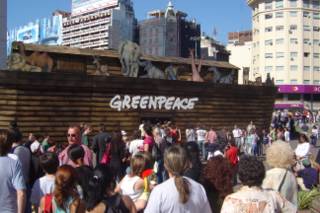 On the opening day of the conference, Greenpeace called on the world's governments to take immediate measures to stop the effects of climate change. The active presence of famous Uruguayan artist, Natalia Oreiro, attracted wide public attention and the local press.
Nadia Martinez
by: ProfMKD @ 5:49 pm | 0 comments 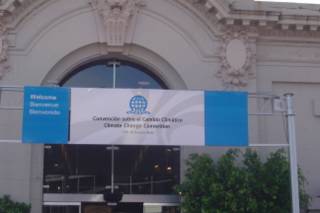 Entrance to the conference venue at La Rural in Buenos Aires.